History remembers James Young Simpson as an obstetrical pioneer. He was the man who developed and popularised the use of chloroform as an anaesthetic. His work significantly altered the shape of childbirth, removing agonies that had plagued women since time immemorial. This was work later enshrined as one of the great medical advances of the 19th century, and Simpson’s name endures as one of importance to this day.

But Simpson was not simply a specialist focused on anaesthesia. As if the challenges of obstetrical practice were not enough for him, his intellectual and practical interests ranged far beyond that. Although this was an era when disciplinary boundaries were less strict than they are today, and PhDs were not prerequisites to achieving some level of understanding, Simpson’s drive to channel his inner ‘Renaissance Man’ was impressive. Nothing seemed too eclectic or arcane to pique his curiosity.

The RCSEd Library & Archive is privileged to have a wealth of documents and correspondence that illustrate this thirst for knowledge. The James Young Simpson collection is not just a snapshot of medical history, but rather it illuminates a broader history. It gestures expansively towards the social reality of the time, an era when religious pieties vied with business enterprise and the scientific method. Three sections of the archive in particular capture this dynamic: those concerning religion, archaeology and antiquities, as well as business. Contained within these archive sections are the sorts of polymathic approaches to the world keen to devour everything as a point of interest. They also contain some wonderfully bizarre and obscure subjects, some of them all the more fascinating in their elusiveness.

As was common at the time, Simpson was a god-fearing man. He belonged to the Evangelical Free Church of Scotland and played an active role in its congregation. Salvation, death and eternity would have been popular topics of discussion, never far from people’s minds when infant mortality was such a pervasive feature of life. JYS 11/8 contains a New Year’s address given by Simpson in the Free Assembly Hall on just those themes. Intoxicated by the Book of Revelation, he admonishes non-believers and encourages them to accept Christ, ending on the downbeat note that while today is your opportunity, “tomorrow [it] may be the Devil’s”. Such religious zeal from a man of science strikes one today as bewildering, but it only stands as evidence of how religious Edinburgh society was at the time. Other items akin to this include JYS 11/16: Simpson’s address on the miracle of Christ’s healing and the wonder of sight, spiritual blindness and the metaphorical restoration of sight. 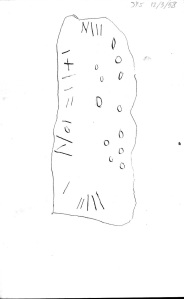 More commensurate with his scientific background was Simpson’s interest in archaeology and antiquities. Throughout his life, he penned a number of publications on topics ranging from Egyptian pyramids to medics in the Roman Army to Scottish curing stones and amulets. Simpson clearly enjoyed musing on the mysteries of objects unearthed and ancient structures discovered. JYS 12/3/35 is a letter to Simpson from Ireland about cromlechs (megalithic stone formations, like Stonehenge). JYS 12/3/33 is a letter to Simpson about caves in Fife, with a description of a runic script found in one of them (Simpson explored seven natural caves in Fife and was the first to describe them in 1865, with their Pictish symbols and Viking representations). There is an enigmatic quality to many of these documents. Some cry out for an occult interpretation, for instance JYS 12/3/58: a rough plan consisting of stones, devoid of any further explanation; or JYS 12/3/68: the photographic negatives of a town, ghostly to the eye and without the reassurance of a caption.

‘Some ancient sculptures on the walls of caves in Fife’.

Less subtle in its macabre connotations is JYS 12/3/9: a letter to Simpson from J. Troy presenting him with a skull from a tomb near Cheops and a mummy’s hand found in Memphis. What Simpson did with these delightful presents is not knowns.

It’s easy to compartmentalise parts of history. Simpson lived in Edinburgh in the mid-19th century and was foremost a medical professional and a family man. It’s easy to forget that this was also a time of empire. The British Empire saw its greatest expansion in the 19th century and many individuals profited. Like his peers – usually men in lofty positions and blessed with a bit of money – Simpson invested in business ventures in the colonies. JYS 13/2/5/17 is an annual report of De Beer’s Mining Company. JYS 13/2/4 is a sub-series containing annual reports from the Gold Fields of South Africa Ltd. Both companies counted Simpson as an investor. Colonial endeavours also concern the sub-series JYS 13/3, which relates to sugar plantations in Tobago, although these investments ultimately proved unsuccessful. 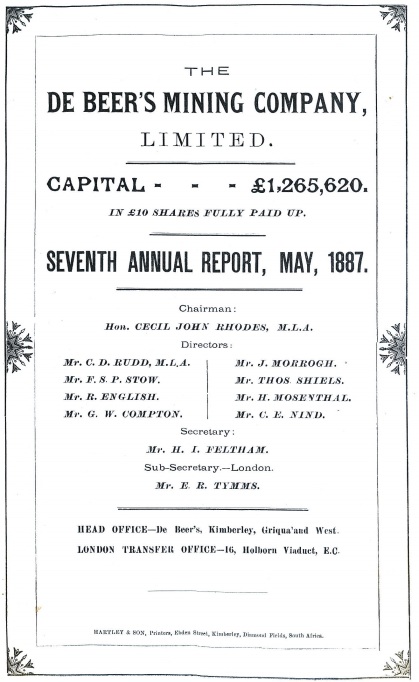 Due to dissatisfaction with local management and fearing the loss of his investment, Simpson sold his sugar interests in July 1867.

Simpson also contributed money to the shipping business run by his in-laws, the Grindlays. This included a share in the Nepaul, a trading vessel that ran into technical difficulties in Chesapeake Bay when the crew mutinied, as referenced in JYS 13/1/35.

This collection shows that Simpson operated not just at the frontiers of obstetrical practice. The frontiers were in fact multifarious: intellectual, historical, geographical, celestial – all of which are brought to life in these letters and documents.